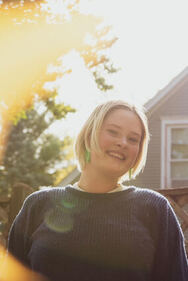 Andrea Leonard (she/they) is a Twin-Cities based singer, songwriter, performer, and multi-instrumentalist. Her musical journey began at 9 years old when she took her first violin lesson; her love for music has only grown since then!  Throughout grade school, Andrea continued violin lessons, played with Greater Twin Cities Youth Symphonies, and sang with various twin cities youth honor choirs. They graduated from University of Minnesota Duluth in 2018, where they studied music and theater with an emphasis in singing and acting. Throughout their years at UMD, they studied various styles of singing including classical, musical theater, choral and jazz style. Along with singing, they also studied acting, movement, and improvisation technique for the stage.  During her time at UMD and continuing after graduation, she has performed in various operas, musicals, plays, choral ensembles, and bands in the Duluth and Twin Cities communities. She has also placed in statewide singing competitions, including placing first at the 2016 Minnesota  NATS competition in the Music Theater Women Division. She continues to perform original music, sing, and play violin and guitar in performances around the twin cities. When she’s not teaching, performing or practicing, she loves to be outside, watch anime, volunteer, and spend time with friends and family.