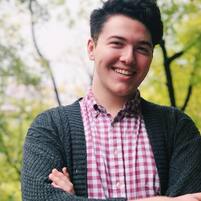 Tanner  VanderKrabben,
Voice Instructor
(They/Them)
Tanner VanderKrabben (they/them) comes to us in Minneapolis by way of Orland Park, Illinois, a small suburb of Chicago. They came here to attend the University of Minnesota-Twin Cities, originally in pursuit of a degree in cello performance, but then switched to become a singer.
During their time at the U of M, Mr. VanderKrabben has collected experiences from both the operatic stage as well as the music classroom. Working with students from pre-k all the way through 12th grade, as well as performing in 5 productions, Mr. VanderKrabben loves the connections that are made through music making. Their roles include Papageno (The Magic Flute), the Vicar (Albert Herring), and Mr. Kofner (The Consul).